Narratives and main assumptions of the three EU Transition Pathways formulated in REEEM:

Coalitions for a low-carbon path:energy carrier suppliers take on the highest burden in the decarbonisation of the EU energy system, with consumers observing this transition in mostly a passive way and being reactive to policies as they emerge.

Paris Agreement:the EU undertakes an ambitious decarbonisation effort, with a target of 95% reduction of CO2 emissions by 2050. This overshoots the Paris Agreement pledges. Both energy carrier suppliers and consumers engage in the challenge.

Summary of the pathways

The key characteristics of the storylines underpinning each pathway and the relative main assumptions are summarised in the table below. 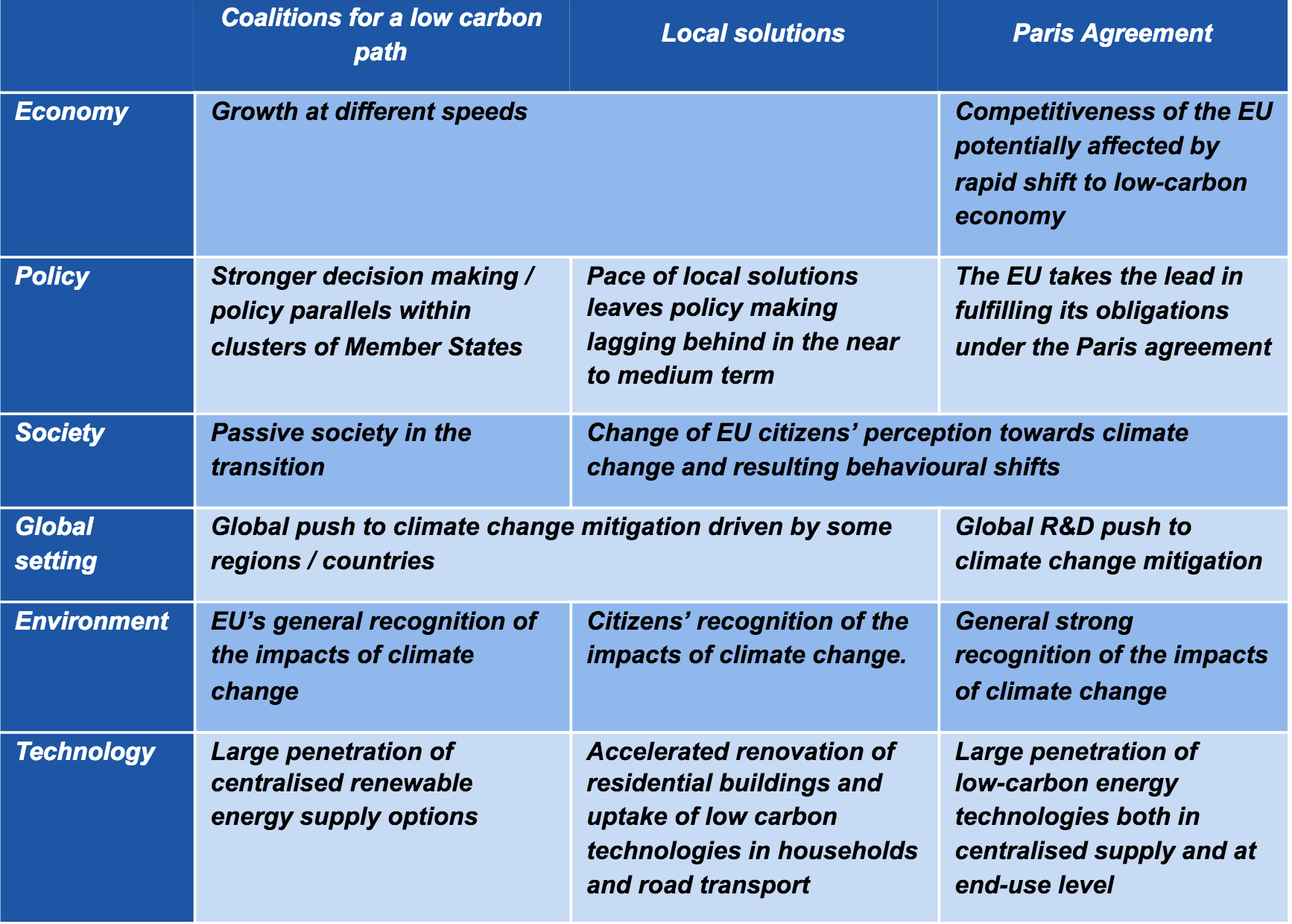 Coalitions for a low-carbon path

Economic growth in the EU restarts after the financial crisis, but at different speeds across Member States. Affinity on trade, labour, defence and energy security policy arises between groups of countries, depending on their geographic location, economy and domestic availability of resources. Under a general political recognition of the impacts of climate change, the EU sets itself on a high decarbonisation path. The emission targets for sectors included in the Emission Trading Scheme (ETS) are complied with and overshot in some instances, leading to 83% cut in energy-related CO2 emissions by 2050 compared to 1990. On the contrary, sectors not regulated by the ETS rely more on consumers’ choices and reduce emissions to a lesser extent. Additionally, despite the common general ambition to fulfil the Energy Union Strategy and the Paris Agreement, coalitions of more and less willing Member States emerge, setting more and less ambitious decarbonisation targets for non-ETS sectors.

A similar coalitional pattern emerges outside Europe, where countries being most affected by climate change extremes and/or having the means take on more climate change mitigation actions than others.

Energy carrier suppliers and large industrial users subject to ETS targets take up large part of the decarbonisation effort. On the contrary, even though the effects of climate change are observed in Europe (especially with Southern regions becoming on average warmer and drier), not all consumers across the EU perceive it as likely to affect their lives significantly. Therefore, they tend to hold on to their current consumption behaviours and transition more slowly to energy efficient end-use appliances, unless pushed otherwise by top-down policies. This ultimately causes the levels of ambition for sectors not included in the ETS (such as residential and transportation) to be generally lower and to vary between Member States.

Under the pressure of policy targets, utilities undertake large investments in centralised renewable energy supply options. In the electricity sector, solar photovoltaic fields and wind farms (both onshore and offshore) dominate. Innovation in offshore wind by breakthrough of floating platforms contributes to the penetration of the technology in the market. Biomass-fired power plants and, to a minor extent, Carbon Capture and Sequestration (CCS), gain a small share. Decarbonisation measures in end use sectors remain more limited. The rate of renovation of residential buildings increases considerably compared to the current rate, but not enough to guarantee complete renovation of the stock by 2050. Technologies such as heat pumps and solar thermal are not cost competitive enough to gain a share in the energy mix.

This pathway was agreed upon as a useful base case for REEEM by the participants of the First Stakeholder Workshop held on October 6th 2017 in Brussels. It resembles characteristics of two of the five scenarios described in the ‘White paper on the future of Europe’ discussed by President Jean-Claude Juncker at the State of the Union 2017: ‘Carrying on’ and ‘Those who want more do more’.

The transition to a low carbon EU energy system is accelerated by communities and households proactively making choices that are low carbon, such as on household energy provision (i.e., stronger efforts to retrofit homes, purchasing of energy efficient (and smart) appliances, replacement of heating systems).

This moderately stronger societal push is underpinned by a recognition of the increasing and stronger climate signals, both within and outside of Europe (i.e. more pronounced and frequent flooding events in Europe, particularly in the winter, and longer and more extreme hot spells during the summer months, leading to wild fires, water shortages and heat-related health impacts).

The pace of change in the demand for low carbon goods initially leaves decision makers in the EU lagging behind in their policy efforts to drive the transition. This lag is particularly evident out to 2030 due to the initial rapid rate of change.

Meanwhile, Member States are set on course to 80% reduction in energy-related GHG emissions by 2050 as compared to 1990. However, coalitions of more and less willing countries set different targets for sectors not covered by the Emission Trading Scheme, depending on their geographic location, economy and domestic availability of resources. A coalitional pattern similar to the one within the EU is identifiable outside Europe. These aspects are similar to the Coalitions for a low carbon path.

This pathway was suggested by participants at a scenario workshop in Brussels on October 6th 2017 as an interesting scenario narrative to explore in the context of the REEEM project.

In the EU, green parties increase their representation in the Parliament. At the same time, the EU emerges stronger from the Brexit negotiations and the financial crisis. This leads to growing alignment between Member States on environment and climate matters, as envisaged by President Juncker in two scenarios of the ‘White Paper on the future of Europe’. The EU makes a political commitment to taking the world lead in fulfilling the Paris Agreement and sets a target of at least 95% reduction of GHGs emissions by 2050 compared to 1990 levels.

On the other side, the increased awareness by citizens results in behavioural shifts and green choices. These come especially when replacing household heating appliances and cars which reached end of life or when offered the chance to renovate old, inefficient buildings.

In the beginning, the shift from the technologically mature and short-term secure fossil fuel supply and the large infrastructure investments put a burden on European economies. GDP growth across Member States is slowed, hindering the competitiveness of the EU versus China and the United States. However, the rate of growth increases closer to 2050. Furthermore, the projected economic benefits from avoided externalities are important.

This pathway was first discussed at the REEEM GA in Zagreb 14-15 May 2018 as an important future to explore in the context of the REEEM project.